Posted at 19:04h in Featured Artists by Webmaster

Imagine attending Laguna Beach High School and not studying art! The students were called “The Artists.” Athene had studied under the British School system in a boarding school in North China. She also received 4 years schooling in Durban Girls’ College in South Africa.

Thus she was enamored with the idea that she could study commercial subjects in High School in order to get a job and save for a college education.

Imagine, too, a repatriate from World War II, being able to attend Wheaton College in Illinois. Her major was art with minors in Bible and Education. Wheaton had just instituted the R.O.T.C. program. A Women Captain recruiter told her there was a program in the Army Medical Specialist Corps that would train her as an occupational therapist. This was a perfect plan for her as she had decided in South Africa to become an occupational therapist.

Although her friends were aghast at the idea of her joining the Army, her Dad strongly approved. Her art was used in various therapies in the Army and throughout life.
Come to the Redlands Art Gallery and see her exhibit and learn of the many varied opportunities available in art.

Athene’s work will be featured August 5-24. 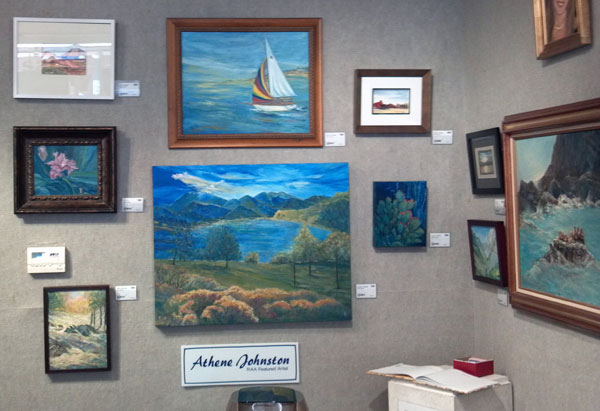