The 44th Annual Multi-Media Mini Show, hosted by the Redlands Art Association, is on display at the Gallery and Art Center, downtown, 215 E. State St, Redlands.

The MMM Show is open to all California artists, which brings in art from Murrieta to Pasadena to 29 Palms.  84 artists submitted 230 pieces ~ but only 145 pieces were chosen to show.  Our jurist was Robin St. Louis from Palm Desert.

The artists competed for over $2000 in cash prizes and gift certificates.

The Multi-Media Mini Show will be in the Gallery through March 21.  Gallery hours are Monday through Saturday 10 am to 5 pm.  The show is open to the public.

Show runs through March at the Highlight Gallery

Yarn Bombing at the RAA

If you’ve been to the gallery in the past month or so, you’ve seen the “Yarn Bomb” installation, that’s the work of Marciella Powers: 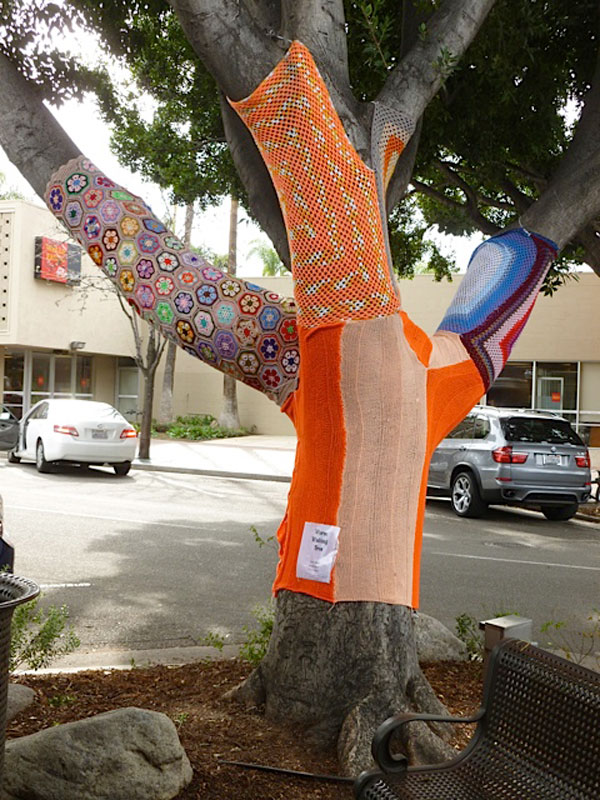 It brings a smile to people’s faces!

“Off the Shelf” by Joanna Mersereau, A.W.S.

This column will review books in the RAA library that I consider valuable art tools. In reading them I found my own imagination was stimulated. I hope it does the same for you.

This review covers the second half of this in-depth book. Hales discusses patterns in all forms: cosmic (galaxies), weather and atmosphere, water, earth and plants. He rounds out the discussion with living vertebrate creatures such as birds, fish and humans. He shows how the use of a grid can transform these subjects into fascinating cartoonish figures.

When he gets to space, proportion, scale and perspective, I paid attention. Many of these theories I have used without understanding the underlying principles (horizon line, vanishing points, foreshortening). While I think these principles have a place in an artist’s vocabulary and expertise, I believe they are not necessary to be understood to make an interesting painting. In fact, the reverse: Why not tweak them as Cezanne and Picasso did?

Hales’ discussion of light and dark is valuable, especially when talking about daylight, nightlight, firelight and electric light. In my opinion, that’s when an artist becomes a master at expressing the emotional quality of a scene. (Georges de la Tour’s firelight paintings.)

Important tips for drama are introduced in the text about shade and shadows and how they are created by the direction of light on different planes. I found the illustrations on lighting the scene—from front, back or overhead—to be particularly exciting. Each lighting carried a different emotion. By understanding these principles we can choose how to represent the scene without having to see it in real life!

I recommend you bypass the section on color. Each artist can obey or ignore the rules. Hales tells you the reason for the rules about color. I say, “Have fun and do your own thing.”

First published in 1972, “Abstraction in Art and Nature” is still a book to be digested slowly and with thought.